The private life of the rich and famous has always generated a huge amount of interest. Would you like to know where eight of the world’s most influential celebrities relax? We reveal the pools – authentic oases – where actors, models and singers switch off from the daily grind of filming, concerts, photo sessions and red carpets. 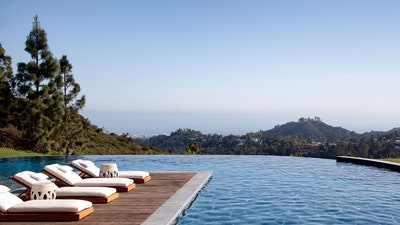 The infinity pool in the home of the model and the quarterback of the New England Patriots in Los Angeles certainly makes an impression. 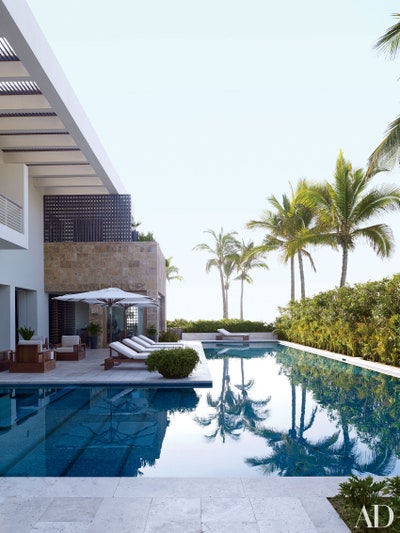 Between cups of coffee, the actor relaxes in this spectacular L-shaped pool in his Mexican mansion. 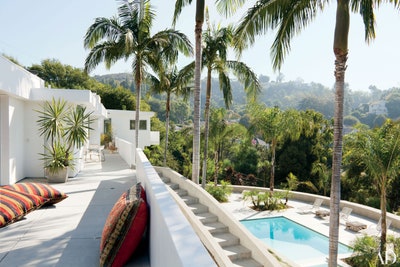 The house on the hills of Hollywood of the leader of the band Maroon 5 is a true Californian dream: open spaces, design and a lot of palm trees.

It’s hard to imagine a pool with better views than those of the American top model’s in Mexico.

The organic shapes take centre stage in the family home of the iconic actor in Malibu, in which an enormous pool imitates a natural lagoon.

The pool of the actress and presenter (in addition to the author of the most popular selfie in history) stands out for the elegant surround in Brazilian granite.

Why not put a statue by Roy Lichtenstein in your pool? Elton John’s Californian home is the dream of any art collector.

One of the actor’s favourite places for relaxing and reading scripts is by the pool of his mansion in Santa Barbara.

America's president Donald Trumps former Greenwich home which sold for roughly $54,000,000 included a convenient indoor swimming pool for days when you just can't bear the though of walking outside to your outdoor swimming pool.

Rumour has it though, that Trump can't swim!

You can check out these and other celebrity pools in the article “19 Amazing Celebrity Pools from the Pages of AD” in the magazine Architectural Digest. In it, you will find amazing pools in which to take a dip with lots of style.

Please see a list of other useful pool blogs below!

Sign Up for Offers, New Products, DIY Tips and More Congratulations! You have recieved Free Shipping Australia Wide* on your order